Nowadays, working with ReactJS/webpack boilerplates, the Hot Reloading piece is already included and we can enjoy it. It’s not yet in create-react-app but that won’t take long I think.

We are going to explain what’s going on under the hood, and how the different projects/plugins used for HR are working together: webpack expressjs middlewares, react-transform, react-hot-loader.

We are going to use the latest React HR project in date react-transform-hmr and not the previous one react-hot-loader which has been sentenced to the maximum penalty : the-death-of-react-hot-loader. RHL is still working properly but you know that the Javascript community is always on the bleeding edge side.

react-transform-hmr is deprecated since, and react-hot-loader v3 is on the edge and is already working. We can see it in action in a previous update of mine: Using react-hot-loader with webpack.

Why should we enjoy Hot Reloading?

In one word : productivity. In another word : DX (Developer eXperience).

For more reasons, read the intro of Using react-hot-loader with webpack.

OK, I lied about the caveats. There is one with react-transform-hmr: it does not handle the ReactJS stateless functional components. BUT, react-hot-loader v3 does now.

What packages to install to use HR

Let’s suppose we already have a base project using:

webpack is the main actor dealing with the HR. It exposes an API to process some parts of the HR pipeline.

We just need to add some wrapper around to use its API, and some more logic to manage the specific React components state: we don’t want to lose the current state of our components when we change something in a Javascript file (a style, some constant, a prop, add a React component inside an existing one etc.).

We just need some HR wrappers

2015-12-28: we explicitely ask for the beta (>=2.0.0) of babel-plugin-react-transform because the latest published version does not work with Babel 6 yet. But work has been done and is just waiting to be merged.

How to configure Babel with HR

For the record, babel-plugin-react-transform handles as many transforms as we want. They are just going to be called right after each other, eg:

As a note, react-transform-catch-errors is used to catch errors that are thrown in the render() method of the React components. It’s using its imports property to redirect the error to another React component. Here redbox-react displays a big red screen of the death with the stacktrace, but it could be anything else.

Technically, react-transform-catch-errors just adds try { render() } catch (e) { ... } around the original render() method of the components. In the catch, it returns the React component we gave in imports.

Our React code is ready to handle HR. We now have to make the server communicate with the browser about code updates.

Bundle recompilation on the fly

First, we need to make the server aware that the source code has changed to recompile the bundle, and then notify the browser. That’s the role of webpack-dev-middleware and webpack-hot-middleware.

They are expressjs middlewares, we just need to plug them:

We have some process that notify the browser it must update some part of the application.

But how is the browser going to handle the updates ? It’s where webpack itself rises.

We need to add some code client-side to handle the update. HR is not browser native or anything.

To inject some code that will handle HR client-side, we will add another entry to the webpack bundle entry, to add another root edge to the dependency graph.

It contains the code that will be used in the browser to handle the SSE communications from the server (the update notifications).

We need to add a specific webpack internal plugin HotModuleReplacementPlugin to expose the generic webpack HR API in the browser, that will be used by this code:

A boilerplate on github

You can checkout gaearon/react-transform-boilerplate to give a try. More options are being used but nothing fancy.

You can notice its .babelrc is using react-hmre instead of our two transforms packages (babel-plugin-react-transform and react-transform-hmr). It’s exactly the same: react-hmre is just a plugin that encapsulates them both. 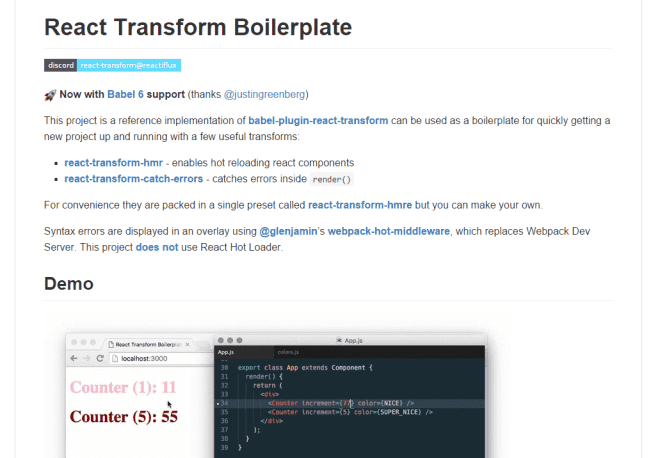 In order to use it, we simply cleanup our config by removing the references to babel-plugin-react-transform in .babelrc and package.json. The webpack plugins stay, there are not related to React in particular.

We install the latest version of react-hot-loader:

Then, we update our webpack.config.js to inject some code into the bundle and around our React components:

Instead of adding this loader, we can just replace our previous .babelrc plugin react-transform by react-hot-loader/babel:

It’s not necessary anymore to wrap it into "env": { "development": { "plugins": [ ... ] } } because the code itself checks for NODE_ENV and noop if it’s "production", but I would consider to add it anyway, because the intention is more clear.

Finally, we must change our index.js to wrap our application into a new AppContainer of react-hot-loader and handle the call to the HR API ourself:

We can find way more information in the PR itself: react-hot-loader#240 and the next README.

Without webpack-dev-middleware, we just need to start the webpack watch ourself:

It still works because webpackHotMiddleware subscribes to the bundle compilation events (no matter what started it).

Doing so, we’ll suffer from some consequences: a bunch of .js and .json files will appear in our project each time a compilation occurs. Those files contain the delta sent to the client to update itself. Webpack only sends the updated chunks, not the whole bundle each time.

Without the code added by react-transform-hmr or react-hot-loader, webpack would not be able to hot update the React components. We would get this in the browser console without it:

What’s inside the SSE?

The browser starts by initializing a SSE request on this specific url : localhost:3000/__webpack_hmr.

If one Javascript file is edited:

Then the frontend asks for those 2 files: (I guess the hash used in the GET comes from the SSE data ? I didn’t check)

Those urls *.hot-update.js[on] are served by webpack-dev-middleware which is serving those files from memory as any classic static file.

They are requested by the code injected by webpack.HotModuleReplacementPlugin() that handles the responses and hot updates the Javascript with the new code.

Before I dug into this, I was finding that the HR was a piece a bit complicated to understand the internals, who were the actors, how does it communicate, etc. I was never sure which package was used for what exactly. I hope those explanations were clear enough. Don’t hesitate to add more details or correct me if I’m wrong.

Finally, it’s not that complex, it just needs a lot of “pipes” to plug everything together.

Unfortunately, there are some caveats with the way I exposed :