“A hash function is any algorithm or subroutine that maps large data sets of variable length, called keys, to smaller data sets of a fixed length.”

Notice that a hash function is expected to have collisions (you could map N*2 keys into a space N (a bucket)) but its goal is to reduce them at the maximum while distributing (spreading) the hashes the most it can. Therefore, you can’t just “go back” from a hash to its key, because a hash has an infinite number of corresponding keys.

“murmur” stands for multiply, rotate, multiply, rotate, because it’s exactly what it does! Along some XORs and bit-shifting operations. murmur3 is well-known hash function, largely used, because of its simplicity, speed, and features (good distribution, good avalanche effect).

It is used across several domains: ids generator, checksums, hash tables, bloom filters, hyperloglog.. anywhere you need to get a fairly unique fixed-length numerical ID (from anything, a string, some bytes[], an object) to be used inside those data-structures.

murmur1 exists since 2008 and murmur3 is the 3rd version (better, stronger, faster!). It fixes some flaws of murmur2 and has a 128-bit variant for x64 processors (default is 32-bit encoding).

murmur3 is NOT a cryptographic hash function: meaning it MUST NOT be used when security is at stake. It’s easy for an attacker to provoke murmur3 collisions and use them at its advantage. (Hash Denial Of Service attack explained with… cats).

There is this very nice article explaining how to make collisions at will: Breaking Murmur: Hash-flooding DoS Reloaded.

murmur3 is mostly used for lookups (in datastructures that supports it, such as hashtables, bloom filters etc.).

As said, “murmur” stands for multiply, rotate, and actually XOR and bit-shifting operations.

It’s possible to give a try online. Note that the constants are different for both platforms x86 and x64, thus being the hashes (for a same key).

As we know, murmur3 has a good avalanche effect.

When one bit in the key is flip, then at least half of the bits in the hash should change.

The finalizer (or bit mixer) of a hash function takes care of the avalanche effect, it’s the last part of the process.

In Scala, murmur3 is part of the standard library, and it’s defined using the 32-bit finalizer (Int):

We can use it with different types of objects:

It’s also possible to use Guava, which implements both 32-bit and 128-bit variant, with the 64-bit finalizer (long):

The finalizers constants were determined through a simulated-annealing algorithm, but it seems possible to get slightly better results as shown here (by removing the random part).

Here is a small program to test the Avalanche effect (sure it can be simplified!).

It picks a random number, then alter one of its bits at each iteration. It does it 10M times and counts how many times it got more than 16 identical bits between the previous hash and the new hash (with the altered key), to know when the avalanche was not good enough:

If we test several thresholds, we get:

Not sure it’s normal to be this “low”. Am I wrong somewhere? I would expect approx 100% for 16, because of the 50% probability that any bit can change in the hash.

For instance, those 2 values have 1 bit altered (the 2nd), and the hashes have only 6 different bits, the avalanche was pretty bad:

To take a closer look at the relations between the input bits and the output bits, here is a good place. We can see clearly some patterns emerging among others hash functions but not with murmur3.

As we said, murmur3 is NOT a cryptographic hash function.

To test the collisions, let’s create our own “hash table”, and insert tons of values inside. At the end, we’ll check how many buckets with collision (several values inside) we have generated:

By inserting around 1M random numbers, we always get around ~100 buckets with collisions (with just 2 items inside), meaning 200 keys collided, from a base of 1M random Longs, thus 0.02%.

It was not that meaningful to test with random numbers, let’s try with real data:

Those paths have the same hash for instance:

We must be especially aware that in a multi-thread or distributed processes environment that need to get the same hash for a given key: they must use the same seed!

If the seed is different, the hash will be different, for the same key:

Most implementations provides a fixed seed (and NOT System.currentTimeMillis() for instance) but also generally provides a signature to set it manually.

The simplest usage is probably to use it generate a shorter and mostly unique String or byte[] from a key (a random number, or a password for instance).

A typical example is memcached. It is using murmur3 as default hash function.

It’s organized in buckets, or bins, or slots, which contain the values with the same hash.

It follows the Pigeonhole principle: the buckets can contain several values if all the buckets are filled. Generally, hash tables have a prime number of buckets, to prevent clustering and get a better distribution (when hashes are multiples of each other).

Note that most hash table implementations have a load factor which determines when the number of buckets will “grow” (generally, it’s set around 0.75). If the table capacity is at 75%, then it’s triggered. When this happens, all the existing elements are either rehashed into a whole new table directly, or it’s done incrementally with 2 tables in parallel (the old and the new one). This is to avoid having too many collisions after a while.

It’s possible to get collisions after the resize, all depends on the formula used on the hashes to determine their new bucket (such as a modulo of the table length).

There is even a program called gperf that generates a perfect hash function (no collision) from a given set of keys.

A simili algorithm would be:

We have no idea what are the top corresponding words here. But for a ML process (features), no need.

HyperLogLog (HLL) is an algorithm to estimate the cardinality of a HUGE set of values (talking about hundreds of millions), and it depends on a hash function.

It’s very efficient because it can be built without having the whole set in memory. To do so, it relies on some smart observations at the binary level. All the detais in the original paper.

“the new algorithm makes it possible to estimate cardinalities well beyond 10^9 with a typical accuracy of 2% while using a memory of only 1.5 kilobytes.”

There is also this nice playground to really understand and see the whole thing detailed.

When querying a Bloom filter for the presence of an element, the only responses are:

When you insert an element to a Bloom filter: 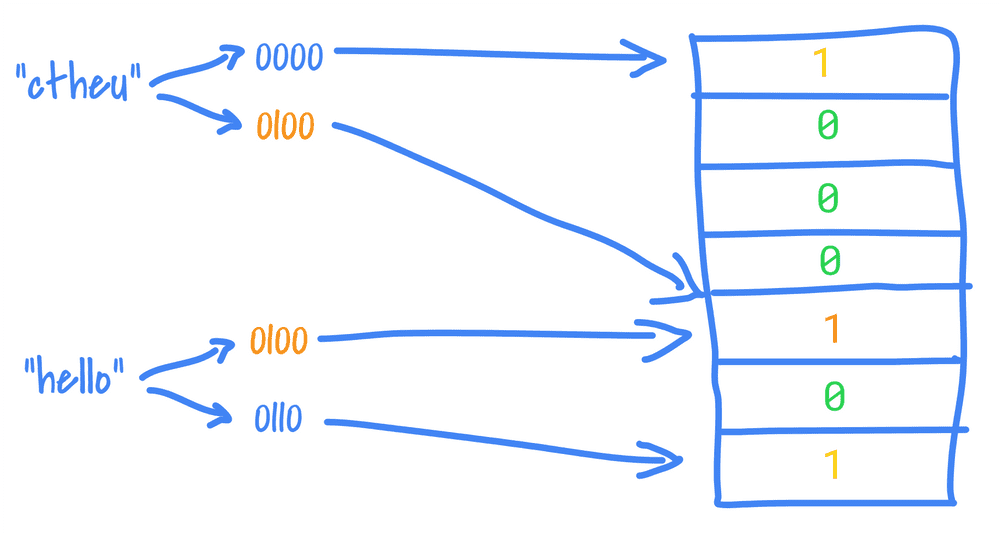 We can use the Bloom filter to check if an element was NOT already inserted for sure: if at least one bit corresponding to one of its hash is NOT set in the structure, it means it was never recorded.

But it can’t tell for sure if it was inserted: because other elements could have set the same bits too. The Bloom filter only guarantees a certain probability (configurable with k and N)

Note that with a simple Bloom filter, we can’t remove an element because its “1” bits could be shared with other elements.

The advantage is that it’s a space-bound data-structure, inserts and lookups are O(k), and we have some knobs to tune it, according to our use-case.

When we create a Bloom filter, we normally provide an expected number of insertions and a desired probability of false positives. A formula will then determine the size of the Bloom filter bitset. Here is the formula and a small generator to see the values:

Note that the y-axis is logarithmic:

Last but not least, a Bloom filter is a serializable structure (this is often used to not start from 0 everytime), and is mergeable with other Bloom filters.

There are tons of variations and techniques around Bloom filters, enjoy: https://en.wikipedia.org/wiki/Bloom_filter.

A last technique based on a hash function is the Consistent Hashing.

It’s implemented on most distributed databases to distribute the data consistently (hence the name) when dealing with added/removed machines. Without it, when this happens all the keys would change of destination.

Other hash functions and benchmarks

There are tons and tons of other hash functions. murmur3 seems to not be the best overall (almost), but probably the most used?

We can find more at Wikipedia.

This post is algo very good because it visualises the randomness of the distribution of several hash functions: https://softwareengineering.stackexchange.com/questions/49550/which-hashing-algorithm-is-best-for-uniqueness-and-speed