Thanks to Kafka Connect & Debezium, Change Data Capture is now a common pattern to expose databases changes as events into Kafka.

It’s easy to setup, but by adding PostgreSQL and Debezium into the loop, it’s necessary to understand some technical knobs accessible to tune the whole system. You probably know that queues are everywhere. The more systems we have: the more queues we have, the more knobs we have, the more metrics we have to watch for.

We’ll explain some of these knobs and metrics to know when working with Debezium (and PostgreSQL).

We have a User-facing CQRS API, taking Commands, updating aggregates and saving them into PostgreSQL. When we save them, we also save the Events caused by the updates in another table, everything in the same SQL Transaction (see the Outbox Pattern, avoiding dangerous dual writes ⚠️). This provides us a “Read your own Writes” semantics.

From there, a Debezium connector gets notified and send the INSERTs into a Kafka Topic “topic-events”, which is consumed by a Reads API to expose the data, and by others services to be triggered, react accordingly, and send us Commands to update the aggregate.

We’re having rounds of Commands and updates on the same aggregate. Each round can trigger a new set of updates. At the end, it will converge to a stable state. Meanwhile, being a User-facing API, the global latency must stay minimal (<1s), hence the latency during each round must stay minimal (if we have 3 rounds, <300ms per round).

Debezium is in the critical path. 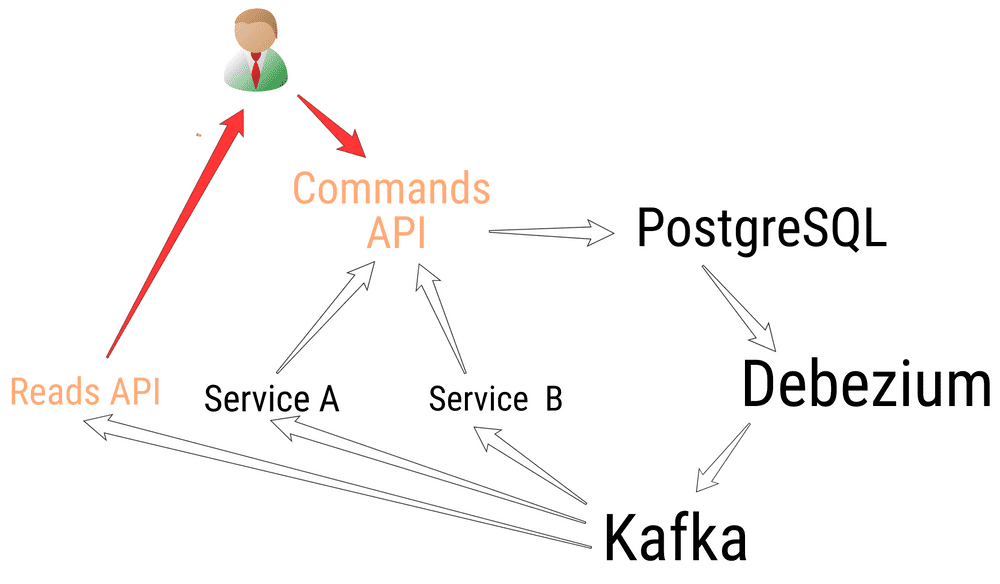 When we tested our first version of the complete loop (several rounds), we were disappointed by the overall latency, between 1s and 2s. It was unacceptable. Our SLO was around 500ms.

We had some tracing in place, and we quickly noticed large “blanks” in our traces. Debezium?

Debezium exposes different times for each record from the database:

To quickly see what’s going on at the individual record level, we consume our topic using Conduktor and a jq projection .ts_ms - .source.ts_ms to do the math for us: 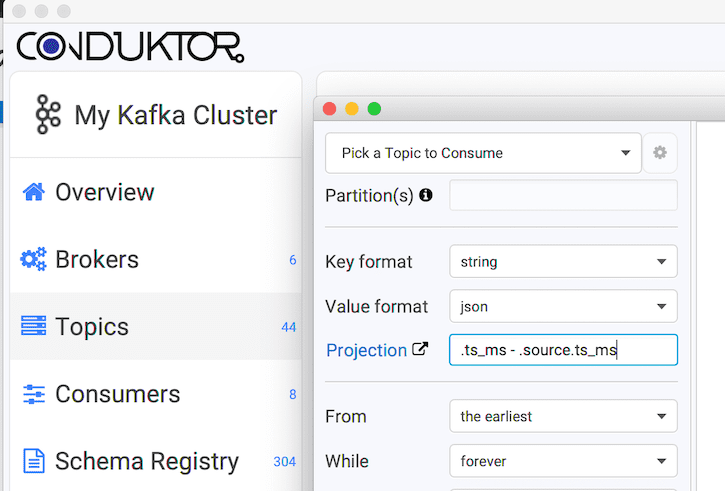 It’s scrolling quickly. According to where we look, we get different pictures:

We understand there is some buffering occuring upstream: some records are quickly processed after being INSERTed, others must “wait”. 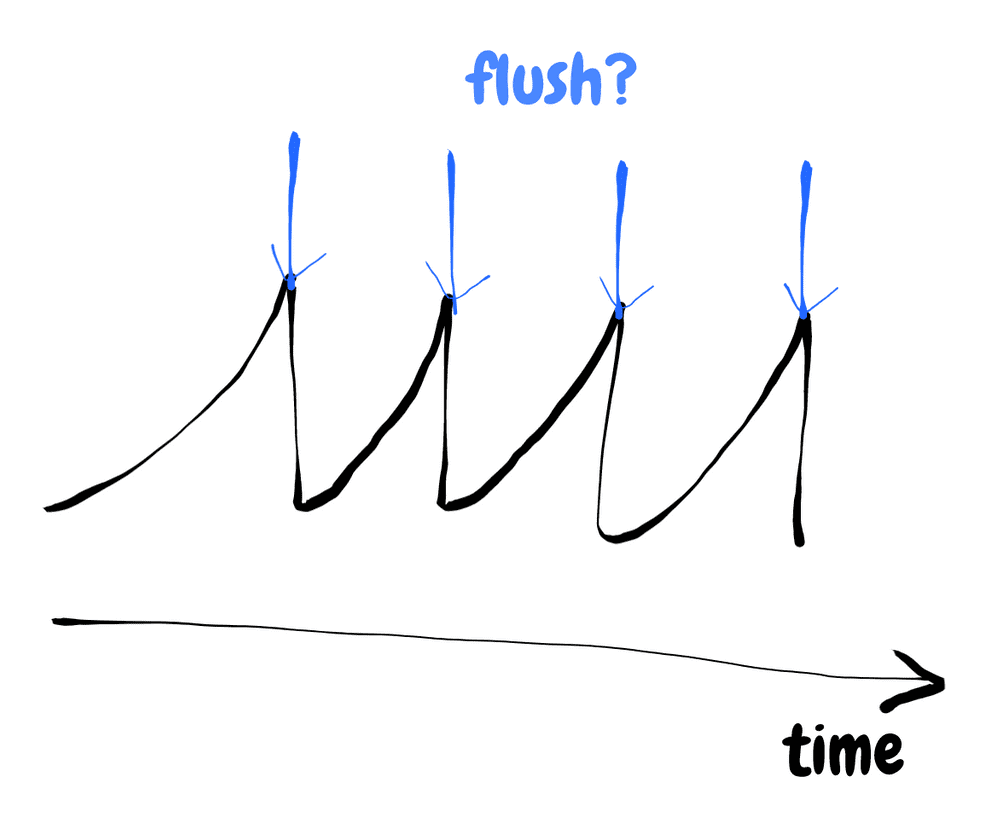 Debezium exposes some metrics about the lag, but it’s not as obvious as with Conduktor.

Exporting its JMX metrics to a Prometheus agent, we can look at debezium_metrics_MilliSecondsBehindSource. It depends on the current time (when processing). It’s like the lag of a consumer group in Kafka compared to now(). You can know if you’re going to catch up with the lag or not.

It’s a bit like what we saw with Conduktor, but more “flatten” and depending of the time Prometheus scrapes the data (every 10s here). Too bad the metric is not an histogram (to get the percentiles).

Note that during this benchmark, the CPU of the database went up to almost 50% (small-sized: 1 vCPU, 4GB RAM):

There is also debezium_metrics_MilliSecondsSinceLastEvent useful to monitor (ie: > 30s ?) and alert us if we expect a regular stream of new events.

We quickly looked at our raw PostgreSQL performances and network (no Debezium involved).

The network is probably not an issue, everything being in the same VPC or using VPC-peering on GCP.

pgbench is a useful tool to quickly test the database. It’s the ab (Apache Bench, for HTTP) of PostgreSQL. A quick and dirty benchmark confirmed us the database and the network are not the cause of this large latency:

30ms ain’t bad, considering this was the default test with transactions more complex than just an INSERT as we do.

To create the Debezium connector, the bare minimum is to give the database schema and table to listen to:

We also have to pick which logical decoder to use (how the records from PostgreSQL are deserialized). Three options:

Each of them has constraints and issues: differences-between-plugins. Nowadays, we should bet on pgoutput because it’s the native one.

Whichever we choose, we can ask Debezium to filter out columns we don’t need in the output to avoid extra payload:

We can configure wal2json by adding parameters in Debezium using slot.stream.params=... to tune the behavior of the replication slot: they will be used when Debezium will create the REPLICATION SLOT in PostgreSQL on startup:

Nothing helped us here, the latency was still high, no matter server/client filtering.

A replication slot is a logical (or physical but we just look at the logical here) piece in PostgreSQL, with a name, that “advances” over time by consuming the WAL. It’s keeping track of the position in the WAL and prevent its deletion (if not consumed yet). It’s like a Pub/Sub.

Remember, it’s important: the WAL is shared by all the databases 👪.

The replication slots needs to be closely monitored. When they are not catching up the WAL, it can’t be removed (because it hasn’t been consumed yet). There are subtleties around WAL allocation: it will grow on the disk until exhaustion if not consumed / configured properly ⚠️. See Debezium notes about this (ie: enable Debezium heartbeats, send dummy records…).

Using plain SQL, we can look at the lag in term of size of the replication slots:

Here, debezium-stg is inactive, but exists. Therefore, the WAL can’t be removed and is up to 21GB and going on.

When using pgoutput, Debezium creates a “FOR ALL TABLES” publication. PUBLICATION are PostgreSQL native structures. The subscriber of this PUBLICATION is Debezium.

On PostgreSQL, we can see this:

Unfortunately, about our latency issue, even using pgoutput did not changed a thing for us. 💁‍♂️

It wasn’t the network, it wasn’t Debezium. It has to be PostgreSQL. Long story short: it was.

Looking at the configuration, here are the interesting bits:

The most interesting bits is the wal_writer_delay by default to 200ms. It looks like the lag we noticed.

“Time between WAL flushes performed in the WAL writer”. It is used when synchronous_commit is off, like in our case, to buffer writes to the disks. on is a safe value against a server crash (it wouldn’t cause any inconsistency issue, “just” data loss).

Using Debezium, to get the lowest latency, this should be on or otherwise set wal_writer_delay to 10ms (what we did).

And boom, fixed, 10ms max. Our overall latency shrank to less than 1s. In hindsight, this looks kinda straightforward right? It’s not always the network. 😃

If you’re planning to use Debezium, you should be aware of the followings…

Using Debezium, it’s useless to set tasks.max to > 1, this won’t matter. Debezium is hardcoded with 1 max, because of the way to subscribe to PostgreSQL (there is no consumer groups in PostgreSQL). This means: bottleneck, no scalability, a poor resilience, critical path. 🌶️

Doing Event Sourcing with the Outbox Pattern means Debezium is really critical. No Debezium, no events.

Debezium does not prevent us to dedup in the consumers. It is still mandatory.

If Kafka Connect crashes (hence the existing task crashes) and restart a new Debezium Connector that will start a new task, this new replacement task will generate the same latest change events that were processed just prior to the crash.

For a consumer, it’s possible to keep the max LSN number it has processed to know if it’s reading a duplicate. LSNs increment monotonically.

All Kafka Connects must be closely monitored to restart as soon as their connectors are not working. We have noticed our Debezium regularly stopped with these kinds of errors:

This can happen when there is a restart of the PostgreSQL master (update, maintenance, whatever) and the standby replica steps up. Because we are using a SaaS (Aiven), it’s normal. Otherwise, it’s not even exceptional for the connection to be “lost”. We must live with failures.

Right now, Debezium just “stops” processing, logs an exception, and stop. This is your duty to restart it.

It’s possible to ensure HA with Debezium: create 2 connectors on 2 different Kafka Connect, listening to the changes of the same tables…

Yes, it’s data duplication for the greater good. Thanks to the idempotence of our consumers (or a dedicated Kafka Streams deduplicator), the rest of the stack is “safe”. In the context of Event Sourcing, the order is also safe.

Let’s say we have a CREATED then a UPDATED of the same entity (order matters).

Replication slots are only supported on primary servers. We can’t replicate from a Read Replica (Debezium acts as a Read Replica).

When there is a master failover in PostgreSQL, the replication slot is gone because they are not replicated on the standby instances ⚠️. Restarting Debezium connector will recreate a replication slot on the new master but we could have some data loss here

If some data were committed before Kafka Connect created its slot, it won’t see them (we can’t create a replication slot starting at a specific LSN). And if Debezium does a snapshot of the table, it may not see every changes (DELETE). This seems to be not resolvable for now in PostgreSQL. There is a thing called “failover slots” but not sure what’s its state, and if that truly fix this issue.